Vertu Motors has named a new franchise director for its Jaguar Land Rover division and recruited a new divisional aftersales director for the Ford South division.

James Boyd was previously the head of business at Vertu Bolton Jaguar Land Rover, establishing the dealership as one of the largest and most profitable of the Group’s locations. He is now set to join the Divisional Team as franchise director.

Boyd has risen through the ranks, having started as a sales executive at Hillendale Land Rover back in 2008. He has since been a business manager and a sales manager, in addition to senior sales manager at Farnell Bolton Jaguar Land Rover, which was acquired by the Vertu Motors group in 2013.

He will now be responsible for leading the division to maximise their financial performance, whilst ensuring sector-leading customer and colleague satisfaction. 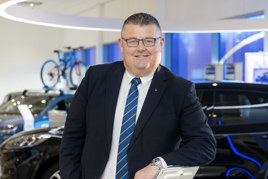 He started in the motor retail trade as a parts adviser at the age of 18 and has since amassed a wide range of experience, in particular working for Audi UK and BMW UK, as well as gaining brand accreditations.

Before joining Vertu Motors, Hardie was an aftersales director at Inchcape.

Burns first joined the motor trade when he left college in 2009 and became a sales executive at the brand’s Bolton dealership, before Vertu Motors acquired the location in 2013. He then progressed to be the site’s brand manager, before taking on a head of business role within Bradford.

Replacing Burns as head of business at Vertu Bradford Land Rover is Jai Aujla. He has worked on the finance side of the motor retail trade since 2013, when he joined Vertu Bolton Jaguar Land Rover as an accounts assistant. He has since taken on many opportunities to climb the career ladder, progressing to his most recent role as dealership accountant.

Robert Forrester, Chief Executive of Vertu Motors, said: “Their promotions are a clear indication of the emphasis Vertu Motors places on professional and personal development, by encouraging and supporting colleagues to progress their careers within the Group.”

A first half trading update from the PLC behind Vertu Motors, Bristol Street Motors and Macklin Motors revealed adjusted profit before tax of £28.2 million (H1 FY22: £51.8m) on revenues up 3.9% at £2bn.

Forrester said in group’s statement that “the business is strategically very well placed with significant firepower to expand its footprint of franchised dealerships across the UK”.

The group added its first Ferrari supercar and Volvo dealerships to its car retail portfolio through the £117 million acquisition of Helston Garages, earlier this month.

Where is fuel cell R&D heading?

The road to a net-zero mobility sector will require a radical rethink of how vehicles are powered. One of the key organisations facilitating funding for UK-based R&D in this area is the Advanced Propulsion Centre (APC), a non-profit supporting low-emission powertrain technology development. Working with the UK government, the automotive industry and academia to accelerate […]

The London Stock Exchange has extended the deadline for Sweden-based Hedin Group to continue discussions and due diligence with Pendragon before it must decide whether to make a formal takeover bid for the major AM100 dealer group which trades under the Evans Halshaw and Stratstone brands. It is now almost one month since Pendragon’s board, led […]

The move towards driverless cars isn’t just a chance for people to relax at the wheel. It’s an opportunity to revolutionise personal transport in a way that offers life-changing benefits to people with disabilities. But for this to happen, we need the car industry to commit to more inclusive design practices that right now are […]