Chief executive Eddie Hawthorne revealed to AM that the AM100 car retail giant will open a new build dealership in Glasgow, to give the market newcomer a “premier base”, before expanding out as volumes rise.

News of Arnold Clark’s partnership with BYD comes three months after Pendragon revealed its intention to broaden its franchise portfolio by partnering with the Chinese electric vehicle (EV) brand.

Hawthorne told AM: “BYD has given us the Scottish region for distribution and the initial dealership will be in Glasgow. That will give us a premier site that we can get up and running before assessing volumes and expanding out from there.

“This will be a completely new dealership for us. We’ve purchased the site and we’re just in discussions with the brand over exactly what we need to do with it from a corporate identity (CI) point-of-view.

“We’ll probably see things start to come together in the early part of next year.”

Hawthorne confirmed that BYD does not operate under an agency model franchise agreement, echoing the more traditional approach taken by fellow market newcomer Great Wall Motors’ Ora EV brand, which has already been taken on by Peter Vardy and Wessex Garages. 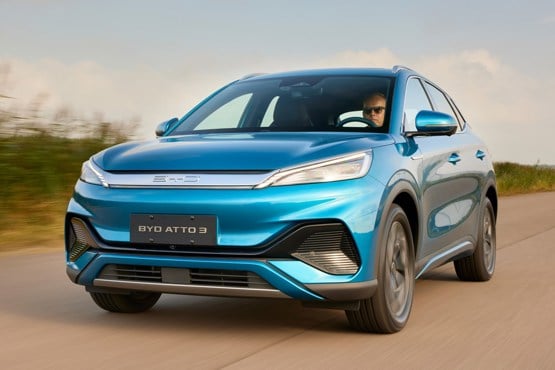 BYD will enter the UK with its Volkswagen ID.3 and MG4-rivalling Atto 3 SUV, Hawthorne said, with four or five new models set to follow close behind.

BYD’s assistant general manager for Europe, Brian Yang, told Auto Express that the UK network might face a challenge to establish itself with just one vehicle but added that situation was unlikely to last for long.

“Next year (2023) we will bring a more comprehensive line-up,” he said, “and all of those models will be made in right-hand drive.”

Among the likely follow-up zero-emissions vehicles are a seven-seat SUV, called Tang, and the Han saloon.

Arnold Clark’s move to adopt BYD as a new brand partner comes after its shock exit from the Toyota and Ford retail networks earlier this year.

In an interview with AM at the time, Hawthorne described the move, which included six Toyota dealerships and 20 Ford sites, as “a refranchising exercise”, stating that the group was “absolutely not” downsizing.

Its Ford and Toyota franchised sites have now been refranchised with exiting retail partners or transformed into Motorstore used car retail facilities.

Yesterday AM reported that Arnold Clark’s takeover talks with £124m turnover Cars2 – a recent addition to the AM100 – had ended with the two parties unable to reach an agreement.

Hawthorne told AM that the business will push ahead with plans for four new used car remarketing centres in 2023, despite pressure from the stock shortages impacting the sector, however.

Geely has taken a share of almost 8% in British performance car brand Aston Martin after a series of bids to acquire a stake in the OEM. The Chinese carmaker, which already owns Volvo Cars and the London Electric Vehicle Company (LEVC) alongside major shares in Lotus Cars, Polestar and Smart, took a 7.6% share in Aston’s […]

Swansway and TrustFord have made efforts to ease the cost-of-living burden and spread some Christmas cheer with large scale festive charity donations. Crewe-based AM100 car retailer Swansway has donated £12,000 of Christmas gifts to charities across the UK as its Santa Patrol campaign returns for 2022, while TrustFord boosted foodbanks across the UK via the ‘Fill […]

Honda has officially opened its order books for the new Civic Type R hot hatch – with prices starting from £46,995. The latest iteration of the Japanese carmaker’s performance flagship is its most powerful to date, delivering 320PS, yet claims to offer the same high levels of comfort, practicality, and refinement as the all-new 11th-generation […]