Car retailers will need to brush up their knowledge of car manufacturers’ advances in electric vehicle (EV) battery technology to avoid a slump in residual values set to impact so-called ‘black cars’.

Research conducted by Cox Automotive and Grant Thornton revealed that the pace of development in EV technology could be set to ramp-up EVs’ zero-emissions range and reduce costs for OEMs in the not-too-distant future.

The result could be a proliferation in ‘black cars’, used vehicles subject to plummeting appeal among used car buyers due to a limited range and longer charging times delivered by outdated technology.

Cox’s insight and strategy director Phillip Nothard said: “At present, without knowing when these step changes in battery technology will occur, it is difficult to determine what cars may be ‘black.’

“However, a good knowledge of battery technology and future battery development should equip retailers with the tools to minimise exposure to such vehicles.”

Approximately 60% of an electric vehicle’s (EV) price is currently attributable to its battery cost, with manufacturers footing an additional cost of more than $10,000 (£8,359) for each EV built over the equivalent internal combustion engine (ICE) vehicle, the research found.

But Owen Edwards, Grant Thornton’s head of downstream automotive, explained that changes in the make-up and production of batteries is accelerating fast. 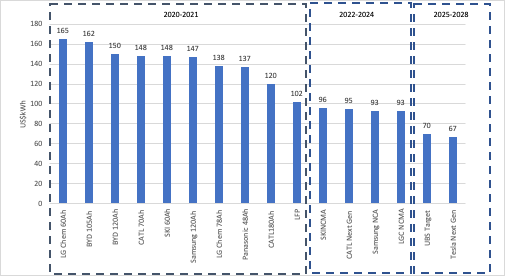 Further step-changes in the production of EV batteries will see the use of cheaper and more abundant raw material batteries, such as lithium-sulphur battery technology (LiSB), continue to grow.

Solid-state battery technology, which incorporates an electrolyte made of solid material instead of the current liquid electrolyte batteries, is also expected to deliver a higher level of energy density, lower risk of fire, and significantly lower use of costly cobalt – potentially increasing EVs’ driving range from 600km to 1,000km.

Research suggests solid-state batteries will be available between 2026 and 2028.

Also under development is Lithium-air battery technology. This has also been calculated to generate vehicle ranges of more than 1,000km from a single charge.

It is currently estimated that battery cost parity to ICE vehicles will be reached between 2025 and 2028.

The research conducted by Cox and Grant Thornton suggested that an acceleration in battery technology could lead to increased volatility in vehicle residual values, especially for leased or financed cars with long-term contracts.

Battery technology developments will ease the burden on car buyers currently struggling to justify the additional cost of an EV, however.

And growth in the global production capacity of semiconductors might also be set to free-up new car volumes and help reduce costs in the medium-term.

In-vehicle connectivity specialist VNC Automotive this week claimed that a drop in demand for high-tech consumer goods prompted by the cost-of-living crisis would free-up semiconductor allocation for automotive applications in the months to come – transforming a lack of chips into a glut.

“It’s ironic that the very situation that triggered the shortage for much of the automotive industry should be driving the recovery, now that it has become reversed due to the prospect of recession,” said VNC Automotive chief executive Tom Blackie.

“Such has been the speed of the shift to oversupply that we are regularly approached by chip suppliers asking if we’d like to increase our orders.” 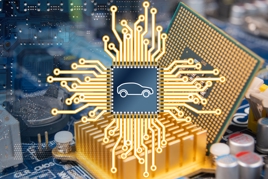 In 2020 the automotive industry accounted for less than 9% of global semiconductor volumes, according to Gartner, worth an estimated $38.7 billion.

“It may still take some time for this freer-flowing supply to trickle down to car-buying consumers, as manufacturers work to clear the backlog that’s accumulated over the last couple of years,” Blackie said. “But in a time of economic gloom, it’s good to find a cloud with a silver lining.”

Swansway Group hopes to have scored a star signing for its digital marketing team with the recruitment of footballer Bradley Carrol. In a move that highlights the Crewe-based AM100 car retail group’s new flexible working policies, the Lancaster City Football Club semi-professional athlete has joined its Volkswagen Van Centre Lancashire team as a digital marketer. […]

Could steam-powered cars decrease the CO2 in the atmosphere?

Curious Kids is a series for children of all ages. If you have a question you’d like an expert to answer, send it to curiouskidsus@theconversation.com. Could steam-powered cars decrease the carbon dioxide in our atmosphere? – Emma, age 16, Springville, Utah With the growing severity and frequency of storms, heat waves and wildfires, and the […]

The road to robotaxis will be an iterative journey

With investor sentiment towards AVs souring, the future of autonomous car-sharing could depend on a far more gradual approach. By Will Girling The post The road to robotaxis will be an iterative journey appeared first on Automotive World. Source link