Data published by the automotive industry body this morning (November 25) revealed that the sector’s vehicle output rose 7.4% to 69,524 units in October as production for home and overseas markets up 12.5% and 6.3% respectively.

Despite 8.8% year-to-date increase output for the UK market volumes remain 10.8% down year-to-date, however, and it remains to be seen whether economic conditions will allow a sustained recovery period. 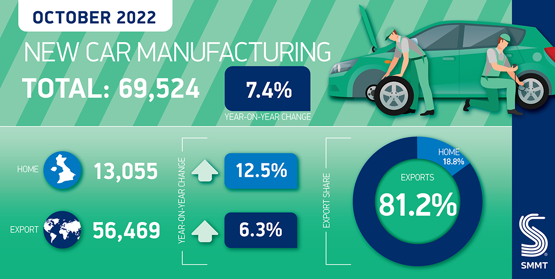 Hawes said: “Getting the sector back on track in 2023 is a priority, given the jobs, exports and economic contribution the automotive industry sustains.

“UK car makers are doing all they can to ramp up production of the latest electrified vehicles, and help deliver net-zero, but more favourable conditions for investment are needed and needed urgently – especially in affordable and sustainable energy and availability of talent – as part of a supportive framework for automotive manufacturing.”

Richard Peberdy, KPMG’s UK head of automotive, said it remained unclear where the investment that the UK car manufacturing sector needs is going to come from.

He added: “The cost of producing cars is rising, with a range of materials more expensive due to inflation, and the industry is nervously awaiting the outcome of the government’s review into energy price support for businesses beyond the end of March.

“Exposure to rising energy prices during 2023 would further pressure new car prices and threaten the global competitiveness of the UK automotive industry.

“The race for countries to be seen as world leaders in electric vehicle (EV) production is well underway and the UK’s position for manufacturing cars, vans and parts depends on very considerable investment in battery manufacturing and skills. At this stage it is not clear where this is going to come from.”

The SMMT said that this illustrated the sector’s “supply chain turbulence”, in particular global chip shortages.

The SMMT said exports of the latest volume, luxury and specialist models drove volumes with more than eight-in-10 (81.2%) cars made heading overseas, equivalent to 56,469 units, while 13,055 cars were turned out for the domestic market.

Hugo Griffiths, consumer editor at carwow, said: “October’s manufacturing figures are in one sense positive as they show a marked upswing on the previous year but, with year-to-date numbers down by over 10%, they also demonstrate how vulnerable the industry is to supply constraints, and how far we still have to go before we get anywhere near pre-pandemic production levels.

“While the vast majority of cars made in the UK are built for export, national manufacturing trends echo those of the global market.

“Given this, UK consumers can still expect lengthy waits for some models, something that can be circumvented by taking a flexible approach when new-car shopping: despite production difficulties many models are in excellent supply.”

Suzuki GB car sales boss Dale Wyatt has revealed he is taking leave from his post to care for his wife, who has been diagnosed with terminal cancer. The long-serving carmaker executive posted on LinkedIn on Friday that he was “stepping back from one of the things I love to do most to take care […]

The IMI has revised its forecast for when the shortage of EV trained technicians will hit the aftersales sector. Based on data from Auto Trader, the IMI now believes the shortage will occur a year sooner than previously estimated, in 2027. The forecast comes despite a boom in the number of technicians that took an […]

Used van values are on the rise, says Aston Barclay

Values of used vans rose for the first time this year during Q3, figures from Aston Barclay show. It comes after a slight decline in prices during the first seven months of the year. The remarketing firm said that despite the average age and mileage of vehicles sold remaining higher than two years ago, the used van […]