Euro NCAP has released the safety ratings for 16 new cars with all but one achieving the maximum five-star rating.

Top marks were issued to the new Range Rover and Range Rover Sport, as well as the new Honda Civic, Nissan X-Trail and Toyota Corolla Cross.

Electric models, including the new Toyota bZ4x and its sister car, the Subaru Solterra, along with the Hyundai Ioniq 6, Nissan Aryia, Tesla Model S and Smart #1 all received five stars in the safety tests.

Nissan said the latest round of testing means the full range of Nissan electric vehicles and electrified crossovers have five-star Euro NCAP ratings.

New to market Chinese models, including the NIO ET7 and WEY Coffee 02 also scored highly, with five stars awarded to both.

The DS 9 achieved four stars, due in part to a penalty in the frontal offset test for being an aggressive impact partner towards other vehicles. The French brand’s flagship model launched last summer. 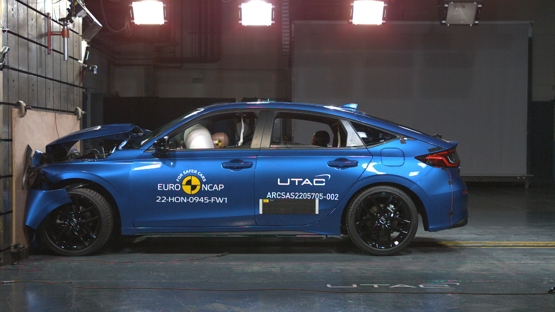 “In 2023, in line with its Vision 2030, Euro NCAP will be focusing on a range of new aspects. For example, we are putting in place autonomous emergency braking (AEB) protocols for motorcycles as well as new scenarios in passive safety for pedestrians and cyclists, extending the area where these two vulnerable users might interact with a vehicle. This is necessary progress in safety for other road users, and we are collaborating closely with industry to ensure we meet Vision Zero objectives and that the demands of the protocols are met.”

To encourage safety developments and upgrades of their vehicles to better protect consumers, Euro NCAP allows vehicles manufacturers to have the same car re-tested or re-assessed to a new rating following meaningful safety improvements.

This has been the case of a few vehicles in 2022 that include the Volkswagen Golf, first tested in 2019, the result of which was published last month, and the Isuzu D-Max Crew Cab, published this month.  Originally given a five-star rating in 2020, new tests have been done to assess the re-designed driver knee airbag.  Dummy readings indicate only marginal improvement, although the impact on the test score is greater, and Isuzu was unable to demonstrate any significant improvement for left-hand drive vehicles.  The D-Max’s five-star rating is retained, even with the poorer performance of the left-hand drive car.

Ratingen added: “Euro NCAP is keen to work closely with manufacturers to ensure we provide a framework for makers to improve the safety performance of their cars. However, it is important that these same manufacturers do not use the six-year validity of the rating simply as a strategic commercial opportunity to satisfy consumers. Manufacturers must show us that they are committed to making a real difference to safety.”

Russia’s ride-hailing market could be worth $43bn by 2030

Russia is reported as the fourth-largest contributor to the global ride-on-demand (taxi and carpool) app downloads, making up 11% of the global market (up from 10% in 2019). Worth Roubles 780bn (US$12.6bn), its market also claims a 51% aggregator share, according to urban public transport analysts Intelligent Transport. The only ride-hailing markets outpacing Russia are Brazil […]

Expert help is at the ready at AM Live next Thursday

Expert help for UK motor retailers is at the ready at Automotive Management Live 2022 next Thursday (November 10), when the biggest challenges and opportunities for franchised and independent car dealers will be discussed. A host of speakers will present on topics critical to the success of any motor retailer at AM Live this year. […]

How can digital commerce enhance the car buying experience?

Khalid Khan explains why manufacturers and dealerships need to keep up with the rapid rise in customer demand for more digital experiences For many consumers, today’s journey of buying a car begins online rather than in a showroom. Like most sectors, the COVID-19 pandemic put many auto dealerships on the back foot, and they had […]