Geely and Renault have signed a non-binding framework agreement that could see them team-up to produce the internal combustion engines (ICE) of the future.

While carmakers across the globe are being encouraged to switch to a future of elelctric vehicles (EV), with the UK set to ban the sale of non-electrified new cars in 2030, the Chinese and French OEMs have set a new course to manufacture and supply hybrid powertrains and highly efficient ICE powertrains for years to come.

Under the framework agreement, revealed during a Renault Group Capital Market Day in Paris, Geely and Renault Group will hold respective 50/50 equity stakes in the new company.

Geely said that the new company planned to operate 17 powertrain plants in three continents, employing around 19,000 people and offering a combined capacity of over five million internal combustion, hybrid and plug-in hybrid engines and transmissions per year.

It believes its product portfolio and regional footprint has the potential to offer solutions for 80% of the global ICE market. 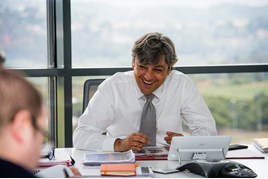 Renault Group chief executive Luca de Meo said: “As Renault Group accelerates with its Renaulution transformation to capture value on the entire new automotive value chain, we are pleased to have agreed plans for an ambitious partnership with Geely to keep developing the ICE and hybrid engine technologies that will remain a critical part of the automotive supply chain for decades to come.

Last month European Union legislators agreed a deal that would require all new cars and vans to be zero-emission as of 2035, becoming the first of its ‘Fit for 55’ package of emissions-cutting measures to be agreed upon by member states.

Also announced at this week’s Renault Group Capital Market Day were the OEM’s plans to launch a new Ampere division focussed upon the production of EVs which will employ around 10,000 staff.

As with its new ICE engine company, Renault plans to invite investment in Ampere but would remain the majority shareholder.

Mazda to harness partnerships to boost EV investment by £9bn

In May 2016, a Propublica report showed that an algorithm named COMPAS (“correctional offender management profiling for alternative sanctions”) used by a US court was biased against black prisoners – the program overestimated the probability that blacks would reoffend. Artificial intelligence, chatbots and other algorithms have also been shown to produce racism, sexism, discrimination and […]

How can we learn from Mother Nature?

Nothing in nature operates individually. Nature works in a connected, circular ecosystem where everything is leveraged, shared and repurposed. Did you know that a grain of sand from the Saharan desert affects the fertility of the Amazon Forest? Or that seaweed in the ocean can produce around 70% of the oxygen in the atmosphere? In […]