The cost-of-living crisis is forcing families to sell their cars, according to Startline Motor Finance’s October Used Car Tracker.

In the research, almost one-in-four (23%) said they already or are going to reduce the number of cars in their family, while 61% said that tightening personal finances have changed their attitudes to car ownership for the worse.

The Startline Tracker also found that 59% were looking to switch to cheaper to run, while almost a third (29%) would buy a car with a smaller engine and 21% simply a smaller car.

Motorists also appear to be turning away from petrol and diesel due to the cost-of-living crisis, with 19% saying they would look next for a hybrid car and 15% electric.

Paul Burgess, chief executive officer at Startline Motor Finance, said: “There’s probably more than one trend happening here. The first is that some two car families are switching to one to cut their outgoings, something for which we hear anecdotal evidence.

“However, there is also no doubt some families that are really feeling the pinch of the cost-of-living crisis have had to become carless, which is something that could have a real and very negative impact on their work and family lives.

“It’s always worth underlining that our monthly research looks at attitudes – it tracks how people are thinking about behaving as well as what they are actually doing – so there are almost certainly not many cars yet being sold but these latest findings make it clear that running a vehicle is becoming much more difficult for the many families hit by the cost-of-living crisis.”

Startline said the research shows a likely consumer preference shift towards smaller models as well as hybrids and electric vehicles (EVs) as people try to reduce their outgoings. 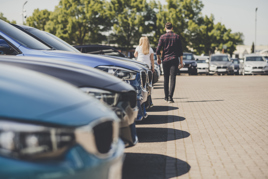 Startline said there are signs that used cars are becoming better buys with people who say they are unattractive because of high prices having fallen from 83% in August 2022 to 50% now.

Data published by Indicata showed that the UK remains the only European country to experience a decline in used car values during 2022.

Burgess added: “There has been a slight fall in used car prices this year and there will probably be another during the next few months.

“Although these are quite small percentages, perhaps potential buyers are noticing. There is certainly an argument that used cars are becoming better value, certainly compared to ongoing price rises for new cars.”

Evolution Funding has achieved a milestone of transacting £1bn in motor finance advances, with total platform transactions of more than £1.5bn this year. The achievement comes seven months after the business posted a record result in March of £117.4m advances. Lee Streets, chief executive of Evolution Funding, said: “Reaching this £1 billion milestone is a proud moment […]

“Car manufacturers are always exploring new ideas for ownership models, and I am confident we will see more concepts emerge in the years to come,” says Scott Kunes, Chief Operating Officer at Kunes Auto Group. However, he notes that “subscription models, are not new. They’ve been around for at least ten years, from flex buy […]

Fuel For Thought: Detroit Auto Show 2022 – An industry in transition

Automotive Monthly Newsletter & Podcast: Detroit Auto Show 2022: An industry in transition LISTEN TO THIS PODCAST The reimagined 2022 Detroit Auto Show, also known as the North American International Auto Show, finished its media and industry days with limited automakers and brands participating after a three-year hiatus in the city. Those OEMs and […]